States and Emergence: COULD YOU GOVERN A COUNTRY?

"Hey, the first Fighting Fantasy gamebook was in the 1980s, right?"

"Sure, 1982. But you can't call yourself a real true genuine grognard unless you've played State of Emergency." 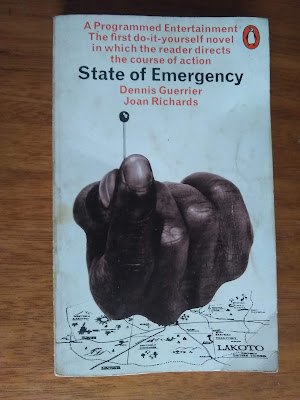 State of Emergency is a 1969 'do it yourself novel' that Yr. Hmbl. Crrspndnt. found in a second-hand bookshop. It was written by Dennis Guerrier and Joan Richards, both civil servants. A paperback copy (below) was published by Penguin; William Heinemann issued a hardback. From the back cover:

COULD YOU GOVERN A COUNTRY? Would your decisions be better than those of its Prime Minister? This is your chance to find out. State of Emergency, the very first of its kind, combines a conventional novel with the technique of programmed learning. The reader is actively involved with the development of an emergent nation and the decisions which are made.

Lakoto is an independent state within the British Commonwealth. Formerly Eastern Victoria, it was one of the last British colonies in Africa to be granted independence. Its Prime Minister, Toumi Okobo, is a man facing destiny, in a situation repeated many times today. Stricken by his estrangement from his British wife, Erica, and by the suspected disloyalty of some members of his Cabinet, and hampered by a grave lack of trustworthy information, he desperately needs an adviser whose judgement is sound.

You are at his shoulder. You can choose between the courses of action open to him. Could you govern Lakoto? Here is your chance to try.

"So where is this Lakoto place? Who lives there?"

Reader:
You may well feel you know as little about Lakoto as Fournier's prospective readers. In this event we suggest you read Appendix A page 243, before going any further.

Lakoto is a landlocked Eastern African republic on the eve of independence. The majority of the population is made up of the Cantarbi people - who in the sixteenth century began to fall under the influence of Islamic expansion from their neighbour Mokoran, eventually gaining a Sultan. Accordingly, when it became a British colony in 1893 there was a strong Muslim minority that would grow to dominate many Lakotonese institutions. Other neighbours include East Kangola and Lawtonia - the latter apparently being rather like Rhodesia (although Rhodesia is mentioned as being alive and well in the course of the novel). 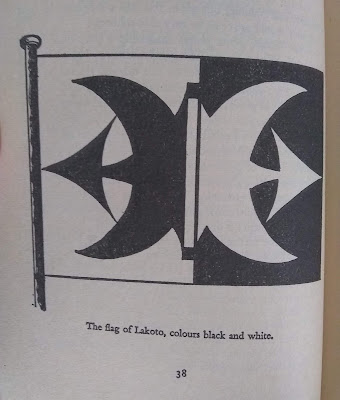 "Duly noted. And the tone of the novel?"

Rather like a certain kind of British thriller of the late 1960s-1970s. Bits of the prose are like the exposition segments in, say, Forsythe's Day of the Jackal.  There's the occasional illustration - Lakoto's flag, some postage stamps - and sketch maps in the back for the country and the capital, Tanabi. Information is sometimes presented as part of an in-universe document - newspaper articles, extracts from Hansard, confidential reports, the page of a notebook. (Some of this is in the Appendices, but not all).

Incidentally, intentions might be good but language can be dated: hence the use of Moslem for Muslim throughout. The French journalist Fournier reflects the following in the introduction at a pre-Independence gala:

Vicky Sarola just about summed up how he liked his Africa: with a European gloss on top but with definite hints of untamed forces prowling about not too far below the surface.

"What of our protagonist, Toumi Okobo?"

An Oxford-educated compromise candidate between the various independence movements. Born to a pro-British Cantarbi Chief in east Lakoto. Spent time in Britain and married Erica Okobo, née Williams. They have two children. His life as portrayed seems rather middle-class - a good but relatively modest official residence, he drives his own car and doesn't have an entourage of chauffeurs, aides and bodyguards. Maybe this is semi-plausible for someone in Okobo's shoes, but I would expect a few more secretaries and the like. The strain on his marriage is also a note that rather grounds him.

It is tempting to believe that Okobo was designed as a sympathetic protagonist for a (White, British) reader. Certainly, enough features of his life seem deliberately familiar: the novel can even take him back on a trip to London and Oxford. Is a sympathetic protagonist necessary for 'the technique of programmed learning'? Of course, the fact of his possible Anglophilia is not necessarily a useful trait in a newly independent Lakoto - an interesting trait to explore.

"Fine. So how does a do-it-yourself novel work?"

There are no paragraph numbers, only page numbers. And instructions:

DO NOT READ THIS PAGE UNTIL TOLD TO DO SO

Messages from the authors ('Reader: Please turn now to page 40.') are given in italics. Directions to the Appendices are given in the text and occasionally as footnotes. As to actually governing Lakoto....

[Spoilers, I guess. Supposing any of you really wanted to go out and read this fresh.]

You may join the first Cabinet Meeting of the newly independent Republic of Lakoto. Not only join it but also see if you can influence its decisions. [...] That is the broad picture; you will have learned the essential details from what you ahve read so far. What is the long-term solution?

Recruit professional men and technologists from other countries....Organise a comprehensive unemployment insurance scheme..... Seek more financial aid from Britain or any other country.....Concentrate on improving standards of education at all levels.

Let's say we want a comprehensive unemployment insurance scheme to 'relieve the poverty and reduce the possiblity of racial disturbances'. Turn to page 30.

Reader:
Your long-term solution would be to organise a comprehensive unemployment insurance scheme. With respect, you would have the country bankrupt in the short-term and would never reach the long-term. An unemployment insurance scheme can operate only where there is a large employed population and a low risk of unemployment. The first step to be taken... [....] It wants to become a modern society, not a soup-kitchen society. Please return to page 29 and choose another answer. Re-read Appendix B, if this will help you to choose.

Blighters! Which of us is meant to be Prime Minister, hmm?

Did you guess the correct answer? That's right, it was in fact Education. (Education. Education.)

So, yes, Guerrier and Richards do this a lot. There's even one choice you can make where the advisor responds:

"I'm sorry, I know you don't mean it seriously."

"I'm sorry too," said Toumi. "I shouldn't be wasting your time with solutions which we both know are unacceptable."

This is even addressed directly at one point:

Reader:
You may feel at this point that the outcome of your choice has been 'stage managed', and that events would not have taken the turn described in the paragraphs you have just read. This may be true. It is possible that order might have been restored in Benallahi. However, what we are now seeing.....

The argument offered is not perhaps unreasonable, but the manner of presentation did make me snort.

Some policies are barred to you, as are some methods:

But Toumi found he was quite unable to approve cold-blooded murder. He had to find another, more subtle, method of getting rid of General Nashur.

Reader:
Your choice may have been the correct one. Time may prove that a ruthless leader, capable of authorising the death of his enemies, is necessary for Lakoto. But surely, this would be the first step.....

Reader:
Toumi cannot dismiss Nashur. Neither can you. Please turn back to page 99 and select one of the other choices.

Blast it all, State of Emergency! Let me make some bloody stupid decisions!

As indicated, the decision making process is quite narrow. This is at its most frustrating when discussing big domestic plans - long-term education policy, hydroelectric dams, the exploitation of oil or mineral wealth. Towards the end of the novel, the rapid pace of the titular state of emergency, the desperation and the diminishing options means that the narrow set of decisions offered makes more sense and feels more fitting. Or maybe I was just used to the technique of programmed learning.

Reader:
We have set out in this book to show that a country like Lakoto cannot survive as a viable economic proposition without outside financial and technical aid. That, given the political situation she is in, she cannot survive without military aid. If you really think she will be better off without aid, either we have put all the arguments badly, or you haven't read them properly. Rather than admit the former we are forced to conclude the latter, and suggest you go back to page 229 and make another choice.

Apparently I'm not that used to it.

"So what was the point of all of this?"

Well, State of Emergency isn't really a good simulation of governance. There's some interesting political manoeuvring, but the reader doesn't exactly get to plan this out. The best way of fending off Nashur is given a level of detail and finesse that is not offered to the options for assassination or dismissal - maybe one could finesse a way to dismiss the General safely.

I shall tell you what it puts me in mind of. One year at school, while other year groups were dispatched off on trips of one kind or the other, my own was kept back. We were herded into the main hall and addressed by the representative of an international development charity - I'm not being coy, I cannot recall which. The year group would form the Parliament of an emerging fictional African nation and select the options of a computer programme. This was all projected up onto a screen.

Anyway, the government collapsed. Well, fair enough. Young twits like us could well make poor decisions. Yet we were told that we could go back and try again online. Some did: I was told later that every single choice led to collapse.

At this point, somebody will doubtless mention Star Trek's 'Kobayushi Maru' - a training exercise for a no-win scenario. [Post-Colonial Africa: the only winning move is not to play.] Given the relative sedateness of the occasion (and of reading State of Emergency), I wouldn't call it an assessment of how we were meant to behave under such circumstances.  More likely, it was an exercise in sympathy. The age of the participants meant we well aware of the cases made for our support by charitable appeals. This meant that we had an awareness not just of the problems involved for a worker and his family in a famine-stricken region, but the problems for the state around that family.

State of Emergency seems planned to do something similar. The tone is, naturally, different, the level of detail higher, the Cold War ongoing - but the notion is the same. The pastiche of East Africa is faintly informative, but ultimately unspecific: one doesn't learn much from that. The decisions made by the state don't get played out in much detail: this isn't a lesson in statecraft. What is left? A sketch. The end is inconclusive, but the fact that Okobo (in the face of a breakaway region, civil strife and border incursions) has started taking aid from Communist China indicates part of how this may develop. 'This is how a rational, sane and sympathetic man can end up taking aid from a sinister foreign power,' Guerrier and Richards are perhaps saying. 'Don't back people in a position like Toumi Okobo into a corner.' Not the worst moral, if you need one.

"But this," said Vicky "is a documentary, not a play with a clever denouement and breaks for commercials. If anybody expects a nice neat ending in this situation they're too cut off from reality to worry about." She took the papers from him and put them on the table. "You're just not in the mood tonight," she said. "Let's have a drink and leave it til tomorrow."

Email ThisBlogThis!Share to TwitterShare to FacebookShare to Pinterest
Labels: Literature, Not Really a Review, Unlikely Sources 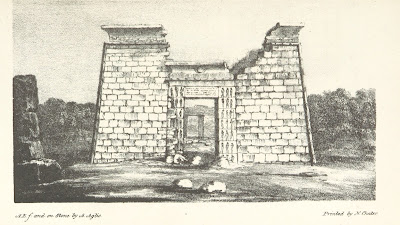